150 years of the Hôtel du Cap-Eden-Roc: a pearl of style 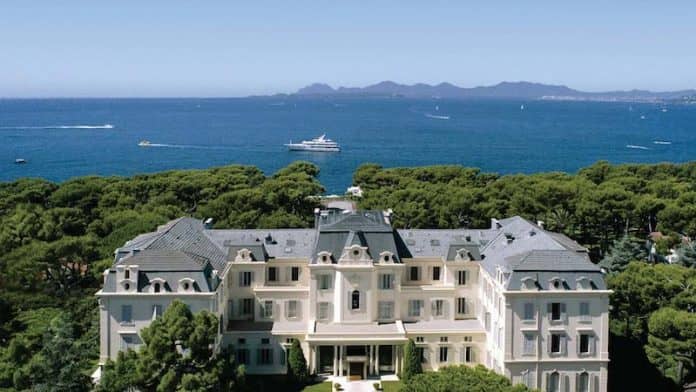 Located in the most iconic area of ​​the French Riviera and renowned for its distinguished guests, including famous artists, members of royalty and Hollywood stars, Hôtel du Cap-Eden-Roc in Cap d’Antibes reopens this month after a refurbishment of the areas interiors curated by the Brazilian architect Patricia Anastassiadis.

Originally completed in 1870 by Alexis de Pletscheyeff, former captain of the Russian Imperial Guard, and a group of French aristocrats and investors, the Grand Hotel du Cap was designed as a refuge for intellectuals and artists. The official inauguration took place on February 26, 1870.

The property has since opened its doors to world-renowned personalities. The novelist F. Scott Fitzgerald, who spent many summers at the Hôtel du Cap-Eden Roc in the 1920s, was inspired when he wrote about his Hotel des Étrangers in the novel “Tender is the Night”. Illustrious American writers Ernest Hemingway and Gertrude Stein, painters such as Pablo Picasso and Marc Chagall, as well as an incredible list of 20th-century historical figures, have all set foot on the Napoleon III-style building. In recent years, the Hôtel du Cap-Eden-Roc has been an extraordinary setting for the most glamorous events during the Cannes Film Festival, such as the annual AmfAR Gala and the parties of the jeweler De Grisogono and Vanity Fair magazine.
A special anniversary

To celebrate the 150th anniversary, the property, which is part of the Oetker Collection, has entrusted Patricia Anastassiadis with the task of creating new design concepts for the three main dining rooms of the property, including the Bar La Rotonde, the Eden -Roc Grill and the Louroc Restaurant. The main goal of Anastassiadis was to provide a fresh and contemporary look to the dining areas, creating a continuation in the dialogue initiated by the previous architects and interior designers.

“The shades of blue and green that respectively recall the color of the ocean and the flora of the Côte d’Azur have been etched in my memories since my childhood. My family and I visited a destination near the Hotel du Cap-Eden-Roc, because my uncle lived near Cap d’Antibes. That’s why, for me, this project is all about memory and its many levels.
It is a tribute to the intellectual abundance of the history of the hotel, which is as representative as the architecture of the building itself. With this project, we are developing modernity by digging into the memories of a vivid past that is still present in every single corner of the hotel “, said Patricia Anastassiadis, founder of Anastassiadis.
Hotel du Cap-Eden-Roc
The new look of the Hotel

For the new design of La Rotonde, the Brazilian architect was mainly inspired by the original oval room surrounded by beautiful gardens. The goal was to create a passage to the outdoor areas by playing with shapes, textures and colors, in particular with those green tones inspired by the path to the sea. To allow for a more organic flow of people, Anastassadis worked on a detailed scheme to improve circulation. As a result, round furniture was designed as dining areas; curvy sofas and chairs and an oval carpet placed in the center of the room that reproduces the exact shades of green of the leaves of the trees in the garden.

The Eden-Roc Grill features nautical shades of blue and red that are synonymous with the style of the French Riviera. The dining rooms of the Grill are connected through the swimming pool and welcome a breezy and lively atmosphere while maintaining the natural elegance of the place.

The Louroc restaurant is located in an idyllic area, right on the promontory overlooking the Lerins islands in the Mediterranean. Many distinguished guests have sat at these tables, as it has always been the place of legendary meetings. The original arches, a key architectural element of the restaurant, have been preserved by Anastassiadis to symbolize their support for the history of the property. In addition, the trompe-l’oeil on the walls has remained intact as it plays a significant role in telling the story of the hotel while interacting with its renovated layout.

The restaurant furniture is custom made and designed by Anastassiadis exclusively for this job. The Riviera sofa, the Eden-Roc chair and the Audrey console are just some of the bespoke pieces that make this area of ​​the hotel unique. The main walls of the room are covered with corrugated wood panels that recall the movement of the sea waves, adding a sophisticated touch to the area. The color palette chosen for this area features nautical shades of ocean blue and coral tones. The dining rooms of the Grill are connected through the pool and offer guests a relaxing view of the ocean.

Yair Dabush – “Excited To Do Business In The United Arab Emirates”