Magical places between Sicily and Langhe: the Chamber of Wonders and the Barolo Chapel

Hidden gems across the peninsula. 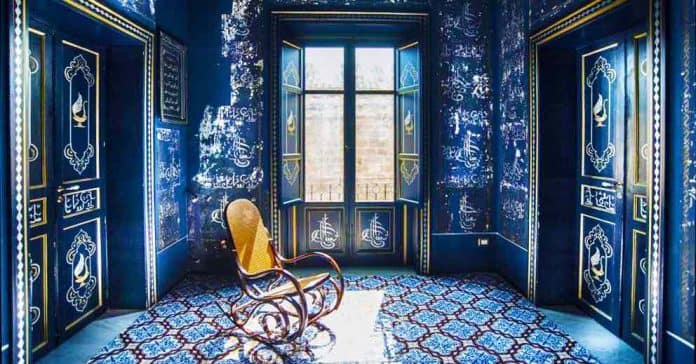 The Chamber of Wonders

Destination, in recent years, of many visitors, the Chamber of Wonders of Palermo is evidence of the influence that Arab culture and the Islamic religion had on the city. This enchanting place, also known as the Blue Room, came to light only in 2003, when the owners of the building, an ancient building located at the gates of the Ballarò market, decided to start renovations.

One of the rooms, under a thick layer of plaster that was crumbling due to the infiltration of water, hid deep blue walls covered with silver Arabic writing and golden decorations.

After careful studies, it was found that this was to be a place dedicated to prayer and meditation: its perfectly square plan is characterized by the repetition of the number 7: seven are the lines of the writings, seven are the doors and windows, there are seven lamps that light up the environment.

One of the phrases, repeated like a continuous litany, is taken from one of the maxims of the Prophet Mohammed: “What God wants happens, what God does not want does not happen”.

The Chamber of Wonders can be visited by appointment, by booking on the Facebook page and paying a 5 euro ticket. In addition to the Blue Room it is possible to access the halls of the building with majolica floors and Liberty-style vaults.
The Barolo Chapel

Another unmissable gem is the Barolo Chapel, an artistic jewel of the Langhe. It is a splendid and colorful church that bears the signature of two internationally renowned artists: Sol LeWitt and David Tremlett.

With its bright and lively colors, divided into simple volumes, the small Barolo Chapel has earned the title of the most colorful church in the world. It was built in 1914 and was initially dedicated to the Madonna delle Grazie. A privileged destination for many visitors, it is located in the Brunate di La Morra vineyard, immersed in the suggestive and verdant landscape of the Langhe.

It was never consecrated and in 1970 it became the property of the Ceretto family who bought it together with the surrounding land. After a long period of decay and neglect, the Barolo Chapel took on a new and colorful look thanks to the intervention of Sol LeWitt, who took care of the external facades, and David Tremlett who instead turned his artistic inspiration to the interiors.

The two brilliant artists, between a glass of exquisite wine and a breath of fresh air in contact with a landscape that does not leave indifferent, gave life to a small and incredible architectural jewel, whose name is due precisely to the precious nectar that is produced in those territories.

Every year, the precious Barolo Chapel welcomes thousands of visitors who come to enjoy the precious panoramic landscape and its bright colors. A real open-air work of art that certainly deserves a view!